About two hours south of Bangor, Maine on I-95 and then just a bit to the east along Maine Route 196 lies the small town of Brunswick, Maine, the home of Bowdoin College.

In 1861, a young man, at the time a professor at the college, used some sneaky tricks to get himself on leave from the college and became an Army officer in the 20th Maine Infantry Regiment.

Not two years later, it was the same young man, at the time a Lt. Colonel, who held the line on the Union’s flank on a hill called Little Round Top near another small town called Gettysburg.

When the war was over, he was a Major General and recipient of the Congressional Medal of Honor. 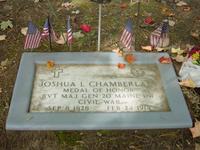 In Maine, they know him as the long-time President of Bowdoin College, where upon retirement, he had taught nearly every subject available to teach – and as a twice governor of that state.

Today, for a few brief moments, I paid him my respects.