Traveled from the eastern side of St. Croix this evening into Christensted (one of only two larger towns here) for “Jump-Up” which is a unique street festival consisting of mainly steel drum bands and alot of drinking.

When in Rome, do as the Romans… yeah, so I had many chilled (and frozen) adult beverages.

Quite tasty let me tell you.

The steel drum band below was the largest and the most entertaining – they attracted quite the crowd: 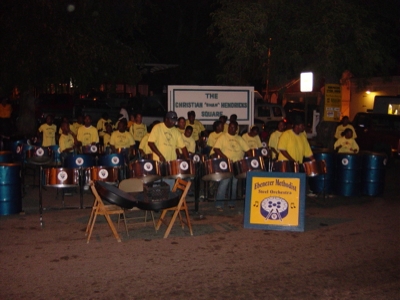 This was the first place I’ve ever been to where one could walk around and drink alcohol in the streets – or even get it made on the street, as we saw with this fellow who was running a full service bar out of the back end of his pickup. Note the presence of the current brother-in-law prospect standing against the truck. 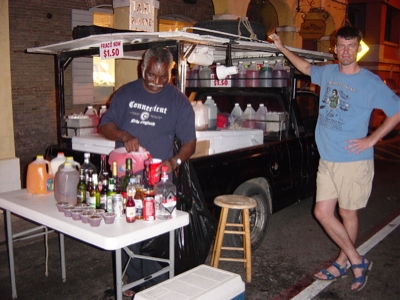 Small world, by the way, as the “bartender” of this particular establishment was from Connecticut – noted by his t-shirt.

After an afternoon of this, returned to the resort and had a few more fine frozen drinks at the oceanside bar. Now I sit on my terrace overlooking the ocean with a large glass of water (to avoid the hangover you see) and ponder the day’s events.

Only nine more nights of this bliss….