Two days ago, the Indianapolis Star reported the death in the line of duty of Officer Tim Laird – who was killed by a gunman during a gun battle that also wounded several other officers. The gunman – using a high-powered SKS rifle – killed officer Laird – wounded several other officers – killed his other mother – and later shot and killed in a close arms battle with Officer Koe, a member of the Indianapolis PD Swat Team.

It’s difficult to describe the feeling of losing a fellow officer unless you’ve been there. 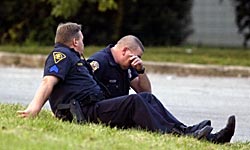 My best friend Chad Swank first pointed me to this story – he is a police officer (detective actually) in Indiana, my home state. Chad and I have known each other since we were four years old. He’s already lost two members of his academy class to line of duty deaths.

Prior to my current job, I worked in law enforcement for nearly two years. I worked with the Fountain County, Indiana Sheriff’s Department and then later for the West Central Regional Community Corrections Agency. During my time there, four officers were killed in Indiana. I went to the funeral of one, Trooper Todd A. Burman, who was assigned to the State Police Post that supported our county.

When an officer is killed – it seems like it affects the whole community. I remember a widespread feeling of loss in the winter of 1993 – when Master Trooper Michael Greene was killed near Indianapolis. Todd was killed later than summer. Two other Indiana officers were also killed that year. 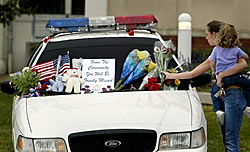 Officer Koe, a 16 year veteran of Indianapolis PD, will be remembered as the hero of this incident. According to stories in the Indianapolis Star, Officer Koe used his AR-15 rifle – which was available to him in his car as a member of the SWAT Team – to engage the suspect in this incident. When he ran out of ammunition he rushed him, knocked him down with his rifle, and then killed him with his handgun. During this process, Officer Koe was shot in the leg and wounded.

Officer Koe has already once been awarded IPD’s Medal of Valor – no doubt he’ll receive a second award. His actions helped save the lives of the two other wounded officers – those in the neighborhood – and his own. 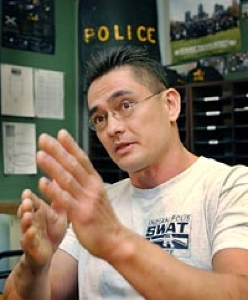 Officers throughout Indiana have already begun wearing the black band – all too common these days – in mourning of a fellow officer. 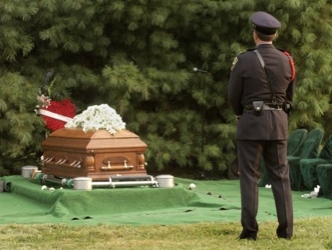 There’s a special bond among police that is difficult to describe. Alot of it, I feel, lies with the fact that I always knew that I would do anything to help another member of my department – and they would to the same for me. I knew that if the going got tough – someone else would be there to help – city, county, or state lines be damned.

I remember an incident of “shots fired” while at lunch with some other members of the department – it was near the Indiana / Illinois state line on Interstate 74. It wasn’t our county – but it was a fellow deputy out there. We responded (2 city units, 2 county units, a state unit, and two community corrections officers). As we approached the rest area where the “shots fired” call had occurred – we saw three Illinois State Police cars fly across the state line – enter Indiana – and move at high speed into the rest area.

Why did they do this – far out of their own jurisdiction? Because another officer was at risk. State lines be damned.

Perhaps that’s the bond that will bring more than 2,000 officers to Officer Laird’s funeral service tomorrow.

And a bit of me will be there as well.