You are here: Home / Deep Thoughts / Leonard Bernstein – Having Passion for what you do

I was reminded of something about Bernstein as I listened to the Minnesota Orchestra perform some of his better known compositions, such as Candide and West Side Story not so long ago.

Everything that Bernstein did – he did with his own unique passion. 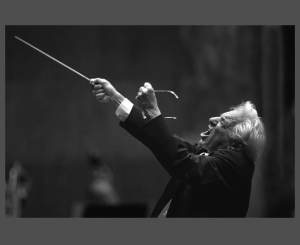 Bernstein was one of the most important musicians of the 20th Century – born in Boston, graduated from Harvard, he got his start as a conductor and instructor with the Boston Symphony Orchestra at their summer home in Tanglewood near Lenox, Massachusetts.  He was hired to be the Assistant Conductor of the New York Philharmonic while still in this 20s – based on the strong recommendation of legendary Boston Symphony Conductor Serge Koussevitzsky.

In 1943, Bernstein was fairly new in his role as the Assistant Conductor in New York – when on the morning of a concert that was to be broadcast nationally – the conductor, Bruno Walter, fell seriously ill – forcing Bernstein to conduct the concert without practice or rehearsal.   Bernstein brought his own energy, passion, and style to the podium that night – and the concert was such a hit that it was featured on the front page of the New York Times the next day — -one musician from the orchestra would later recollect:

“You just couldn’t believe that a young man could create that kind of music.  Here were players in their 50s and 60s with long experience.  And here this little snot-nose comes in and creates a more exciting performance.

We were supposed to have gone over it with Bruno Walter, we had rehearsed it with him and performed it with him, and this had nothing to do with Bruno Walter.   The orchestra stood up and cheered.  We were open-mouthed.  That man was the most extraordinary musician I have ever met in my life.”

Bernstein brought a level of energy, uniqueness, style, and strong passion to the conductors podium that the staid classical music world had never seen – and hasn’t really seen in the years since.  As you can tell by the pictures here – he was just different.  He was so energetic that one time he completely fell off of the conductor’s podium during a concert from bouncing around so much while conducting! 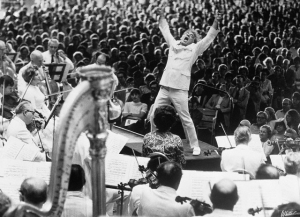 Bernstein went on to serve as the Music Director and conductor of the New York Philharmonic for 11 years – composed many classic pieces – but he always ventured back to where he started each year and would conduct the Boston Symphony at Tanglewood each summer.  His last concert, on August 19th, 1990 – not long before his death later that year at age 72, was Beenhoven’s 7th Symphony – on the podium at Tanglewood.

Some critics might have said that Bernstein’s energy was not good for the art that is classical music – but what I choose to take away from this is that we should never be afraid to bring energy and passion to what we do – that passion is contagious – as Bernstein showed.

We should never be afraid to show our passions about what we do.