You are here: Home / Deep Thoughts / One Year 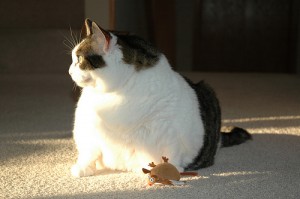 It’s been almost an entire year, almost to the hour as I write this, since Galadriel passed away.

Six months ago, I tried to write about how I felt at that point, and utterly failed.

But in many ways, that posting wasn’t an utter failure, because everything that I wrote in it was true.

I still look for her.. In fact, this very morning, before the fogginess had lifted from my brain, I was wondering where she was when I woke up.

A few days ago, I downloaded the video for I will follow you into the Dark by Death Cab for Cutie. I could only watch about thirty seconds of the video, featuring a pair of rabbits who grow old and then pass away together, before I broke down.

One year later, I still cry.