You are here: Home / Deep Thoughts / The Patriots of Massachusetts

Those of you that know me, know that I am not a fan of Senator Ted Kennedy. He is the senior Senator of the state in which I reside and other than that, I don’t really have much kind to say about the man.

I watched his speech tonight, and while most of it went as I expected from the Senator, I was rather impressed with this section of his speech:

The roots of that America are planted deep in the New England soil. Across this region are burial grounds, many so humble you find them without intending to. You’re in a town like Concord, Massachusetts, or Hancock, New Hampshire. You’re visiting the old church there, and behind the chapel you find a small plot. Simple stones bearing simple markers. The markers say ”War of 1776.”

They do not ask for attention. But they command it all the same. These are the patriots who won our freedom. These are the first Americans, who enlisted in a fight for something larger than themselves — for a shared faith in the future, for a nation that was alive in their hearts but not yet a part of their world.

They and their fellow patriots won their battle. But the larger battle for freedom, justice, equality and opportunity is our battle too, and it is never fully won. Each new generation has to take up the cause. Sometimes with weapons in hand; sometimes armed only with faith and hope, like the marchers in Birmingham or Selma four decades ago.

Sometimes the fight is waged in Congress or the courts; sometimes on foreign shores, like the battle that called one of my brothers to war in the Pacific, and another to die in Europe.

Now it is our turn to take up the cause.

They were the men who stood at the bridge in Concord, Massachusetts and refused to yield: 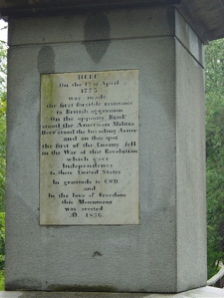 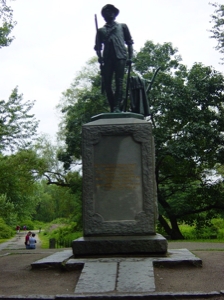 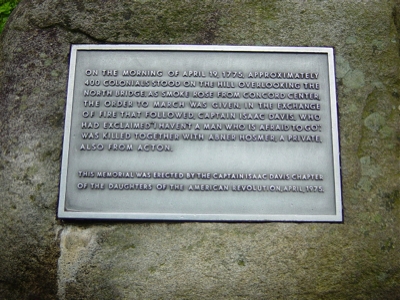 Senator Kennedy is right. As you walk through the town square, you’ll spy the church just off of the village green. You’ll be drawn through the front doors, off to the side, and then out the door that leads into the church plot out back. You’ll spy the more modern stones of recent years – but you’ll be drawn to the dull white one at the edge of the field. And there, you’ll come face to face with a man that died in 1775.. or 1776.. or 1777.. and you’ll hear his call from beyond.

That’s one of the wonders of living in this place where our country was born as an idea in the heads of men like John Adams, Robert Treat Paine, John Hancock, Sam Adams, Paul Revere… and many others.