You are here: Home / Archives for Massachusetts

There are moments when Scott Brown evokes a 12-year-old boy who woke up one day in a politician’s body—as if the Tom Hanks character in Big had asked that fortune-telling machine for a Senate seat. He certainly has the 12-year-old’s vernacular. Stumping for John McCain at a small Christian college in March, the junior senator from Massachusetts opined, “If you told me five months ago that I’d be standing here in front of you, I would say, ‘You’re full of it.”’ He also has the 12-year-old’s gee-whiz sensibility. After learning that he’d made Time magazine’s list of the world’s 100 most powerful people, Brown exclaimed to The Boston Globe, “I didn’t realize it was in the world. … Lady Gaga’s number four, so let’s be real.” As a senator, he seems most excited by activities that appeal to the prepubescent mind. “As soon as his hip gets better, we’re going to do some bike-riding,” he said in April when asked about his relationship with his new buddy, John Kerry.

via Mr. America | The New Republic.

I am shocked, *shocked* that someone would do something like this:

Thousands of consumers are gaming Massachusetts’ 2006 health insurance law by buying insurance when they need to cover pricey medical care, such as fertility treatments and knee surgery, and then swiftly dropping coverage, a practice that insurance executives say is driving up costs for other people and small businesses. 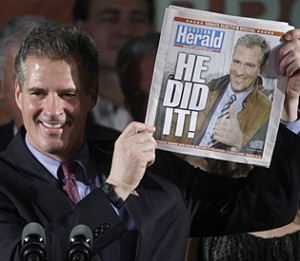 I’m still somewhat surprised that this actually happened. In Massachusetts of all places.

I only wish that I was still able to vote there – so that I could finally cast a vote for a Republican worth his name in my old home state.

How big of a deal is this? Huge.

What happens next depends on the democrats — Barney Frank was a true class act tonight with this statement – which I think indicates the direction that things are going to go:

I have two reactions to the election in Massachusetts. One, I am disappointed. Two, I feel strongly that the Democratic majority in Congress must respect the process and make no effort to bypass the electoral results. If Martha Coakley had won, I believe we could have worked out a reasonable compromise between the House and Senate health care bills. But since Scott Brown has won and the Republicans now have 41 votes in the Senate, that approach is no longer appropriate. I am hopeful that some Republican Senators will be willing to discuss a revised version of health care reform because I do not think that the country would be well-served by the health care status quo. But our respect for democratic procedures must rule out any effort to pass a health care bill as if the Massachusetts election had not happened. Going forward, I hope there will be a serious effort to change the Senate rule which means that 59 votes are not enough to pass major legislation, but those are the rules by which the health care bill was considered, and it would be wrong to change them in the middle of the process.

For once, Representative Frank and I may actually agree on something.

“Democrats can stop hoping at this point.”

Andrew Sullivan said it… not me

The President comes to town to help his senate candidate, Martha Coakley, and finds, perhaps a bit of a cold reception.

He may have come to town to fight for his agenda, but there is a growing body of evidence that his agenda – on health care, on energy, even on financial regulatory reform (which somehow the president equates with yet another tax on the banks that actually repaid their government loans) – isn’t what the people of Massachusetts are looking for right now.

Tomorrow, we’ll see if Scott Brown can turn his lead in the polls into reality – and become the first Republican elected to the Senate from the Bay State in a very long time.

Surely that had to be a joke.

There’s a real chance that Scott Brown could win the Massachusetts Senate special election on January 19th. Let’s hope that he can.

But the senator’s condition took a turn Tuesday night and a priest — the Rev. Patrick Tarrant of Our Lady of Victory Church in Centerville, Mass. — was called to his bedside. Mr. Kennedy spent his last hours in prayer, Father Tarrant told a Boston television station, WCVB-TV.

Mr. Kennedy had told friends recently that he was looking forward to a “reunion” with his seven departed siblings, particularly his brothers, whose lives had been cut short.

His politics were not mine, but no matter how you look at it – a great man and one of the last of the that generation of Kennedys has passed on.