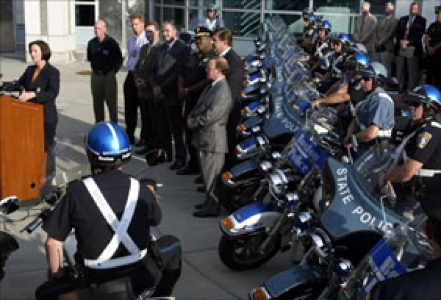 The Boston Globe is reporting today that the Boston Police are going to begin taking aggressive measures to curb the sharp increase in violence in South Boston:

In response to escalating violence in Boston, officials said yesterday that State Police and federal agents will be deployed throughout the city in a massive show of force, using the kind of cooperation between law enforcement agencies seen during the Democratic National Convention.

With officers on motorcycles lined up behind her outside police headquarters, O’Toole said federal agents from the FBI; the Bureau of Alcohol, Tobacco, Firearms, and Explosives; and the Drug Enforcement Administration will work with Boston police, Massachusetts Bay Transporation Authority police, and State Police to patrol troubled neighborhoods, in uniform and undercover.

She said that federal, state, and city law enforcement will combine undercover and uniformed forces, a more significant level of cooperation than was attained during the antiviolence campaigns of the late 1980s and early ’90s, when the city saw a sharp rise in gang violence and homicides.

Boston’s violent crime rate – particularly in the South Boston, Dorchester, and JP neighborhoods – is skyrocketing. Already this year more homicides have occurred than in all of last year.

Task Forces such as this can work – but they are almost always temporary. At some point, they will go home. It’s going to take a long-lasting strategy in order to drive down this violent crime rate. But this is a good first step.