After nearly eighteen months of silence on this blog, I thought that there was no better day to return than on Memorial Day.

Today is the day that we set aside to honor the men and women who have given the ultimate sacrifice so that we may live in freedom.

Many of us take the day to BBQ and spend time with family, neighbors, and friends. But we should also take the time to remember those that gave all so that we can live as we do – in a free country, populated by a free-thinking people.

My own memories of Memorial Day run deep. I was raised in a family – and in a community – that honored its veterans and never failed to give them the proper respect. My elementary school music teacher – Carmen Abernathy – often told stories of World War II – when her husband flew B-17s out of England. My community paused on Memorial Day at our veteran’s memorial at the county courthouse on the town square to remember. The traditions, in some ways, of growing up in small town America.

Later in my teen years, as a Boy Scout, we took time on the weekend before Memorial Day to span out across the county in order to place a flag in front of each veteran’s grave in the county. Some had died as old men – having returned home to begin their families or lead successful lives.

Just as many had not.

Today, I pause to remember the more than 600,000 Americans who have died in the service of our country. 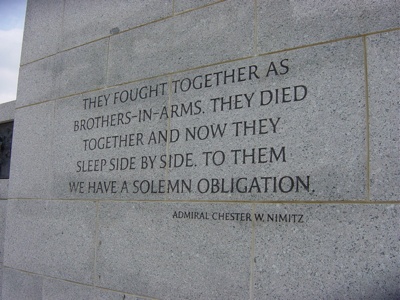