You are here: Home / Archives for Law Enforcement

I meant to write about the 20th anniversary of Indiana State Police Master Trooper Michael Greene’s death at the hands of a man at the side of Interstate 65 just outside of Indianapolis back on February 5th, but life intervened.

Master Trooper Greene’s death was one of the first line of duty deaths that happened during my brief stint in law enforcement.

Unfortunately, I’m not able to find the fine column that was published in the Indianapolis Star the next day by one of their editors who was one of the first upon the scene and assisted first responders with Master Trooper Greene’s injuries. I have a hard copy but it’s packed away in preparation for my move.

He died shortly afterwards, leaving behind a wife and two children.

You can see his memorial today just north of Indianapolis on the southbound side of I-65.

Radley Balko, as usual, gets it right on the trial and verdict of former BART police officer Johannes Mehserle:

Early in the morning of January 1, 2009, in a now infamous incident captured on video by dozens of cell phones and replayed across the globe, Bay Area Rapid Transit (BART) Officer Johannes Mehserle shot and killed 23-year-old Oscar Grant as Grant lay on his stomach on an Oakland BART platform. Last week, a Los Angeles jury found Mehserle guilty of involuntary manslaughter. Because the jury had the option to convict Mehserle of second-degree murder, and perhaps because the jury contained no blacks (Mehserle is white, Grant was black), the verdict has enraged civil rights groups and sparked protests and rioting in Oakland. The Department of Justice is now looking into the possibility of trying Mehserle a second time under federal civil rights law.

The jury got it right.

More than 1,000 of them – to pay their final respects to four officers from the Lakewood, Washington Police Department, who were killed in the line of duty just over a week ago. 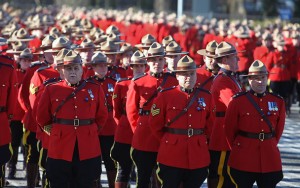 When arson investigators in Houston needed help restoring a damaged surveillance tape to identify suspects in a fatal fire, they turned first to local experts and then to NASA. With no luck there, investigators appealed to the owner of one of the most advanced crime labs in the country: Target Corp.

Target experts fixed the tape and Houston authorities arrested their suspects, who were convicted. It was all in a day’s work for Target in its large and growing role as a high-tech partner to law enforcement agencies.

In the past few years, the retailer has taken a lead role in teaching government agencies how to fight crime by applying state-of-the-art technology used in its 1,400 stores. Target’s effort has touched local, state, federal and international agencies.

Besides running its forensics lab in Minneapolis, Target has helped coordinate national undercover investigations and worked with customs agencies on ways to make sure imported cargo is coming from reputable sources or hasn’t been tampered with. It has contributed money for prosecutor positions to combat repeat criminals, provided local police with remote-controlled video surveillance systems, and linked police and business radio systems to beef up neighborhood foot patrols in parts of several major cities. It has given management training to FBI and police leaders, and linked city, county and state databases to keep track of repeat offenders.

Over at Power Line, John asks:

Do we have the Democrats’ pledge that under a Democratic administration, the government would not use radiation-detecting equipment to search for dirty bombs? If so, that should make it a lot easier for millions of Americans to cast their votes in the 2008 election.

Likewise, I’d like to hear the Democrats stand up and say that they’re also going to terminate the NSA intercept program. It will make it a hell of lot easier for the electorate to choose sides.

Of the many legal analyses of the NSA’s wiretap program that I’ve read – at least the ones actually written by lawyers – John @ Power Line Blog appears to have the best breakdown of the legality of this program that I’ve seen:

There is no mystery about the legality of the NSA intercept program. It is intended to capture foreign intelligence information, including information about potential terrorist threats, and as such, every federal court that has addressed the issue has held that it is within the inherent constitutional power of the President as Commander in Chief. Everything else is immaterial.

This brings us back where we started, i.e., the Constitution. The only constitutional limitation on the President’s power to intercept communications by Americans for national security purposes is that such intercepts be “reasonable.” Is it reasonable for the administration to do all it can to identify the people who are communicating with known terrorists overseas, via the terrorists’ cell phones and computers, and to learn what terrorist plots are being hatched by those persons? Is it reasonable to do so even when—rather, especially when–some portion of those communications come from people inside the United States? I don’t find it difficult to answer those questions; nor, if called upon to do so, would the Supreme Court.

There are, of course, liberal law professors who would like the law to be different from what it is. They are free to develop theories according to which the Supreme Court, should it someday address this issue directly, would rule as they wish. But the administration is entitled to rely on the law as it currently exists. And there is simply no question about the fact that under the Constitution and all controlling precedents, the NSA intercept program is legal.

John Schmidt, who was one of Clinton’s Associate Attorneys General, writes in the Chicago Tribune:

President Bush’s post- Sept. 11, 2001, authorization to the National Security Agency to carry out electronic surveillance into private phone calls and e-mails is consistent with court decisions and with the positions of the Justice Department under prior presidents.

The president authorized the NSA program in response to the 9/11 terrorist attacks on America. An identifiable group, Al Qaeda, was responsible and believed to be planning future attacks in the United States. Electronic surveillance of communications to or from those who might plausibly be members of or in contact with Al Qaeda was probably the only means of obtaining information about what its members were planning next. No one except the president and the few officials with access to the NSA program can know how valuable such surveillance has been in protecting the nation.

It will be interesting to see in the coming years how this plays out. My prediction is that a Court of Appeals, unless it’s the 9th Circuit, will rule in favor of the President. The Supreme Court will likely do the same – but much hinges as well on some other cases that will be heard before this as I believe they will establish precedent that may be applicable in this case in terms of the wartime powers of the President under Article II.

Today’s New York Times has this story about police surveillance of protest groups and activists:

Undercover New York City police officers have conducted covert surveillance in the last 16 months of people protesting the Iraq war, bicycle riders taking part in mass rallies and even mourners at a street vigil for a cyclist killed in an accident, a series of videotapes show.

In glimpses and in glaring detail, the videotape images reveal the robust presence of disguised officers or others working with them at seven public gatherings since August 2004.

The officers hoist protest signs. They hold flowers with mourners. They ride in bicycle events. At the vigil for the cyclist, an officer in biking gear wore a button that said, “I am a shameless agitator.” She also carried a camera and videotaped the roughly 15 people present.

And while this may make some people uncomfortable, I ask.. so?

I do not want law enforcement interfering or attempting to steer the course of these events, which some allege in this article.

However, I have zero problem with them collecting intelligence information. Some of these groups are disruptive – and were disruptive during the political conventions in 2004 – in both Boston and New York. Shouldn’t the police be investigating to determine if there’s going to be a threat?

I have a new standard by which I’ll measure the success or failure of the current Administration: whether or not this scumbag is still breathing in January 2009. Chapomatic makes pretty much all the points I’d make about the Germans freeing Mohammed Ali Hamadi, murderer of SW2(DV) Robert Stethem, in what they’re claiming was not a “terrorist for hostage” deal.

As much as I’d like to see Hamadi dead, I guess I wouldn’t mind too much if he’s just captured and returned to the U.S. to face trial and subsequent execution. And if he’s captured overseas, and our European allies make a big stink about flying him through their airspace, I know just the warship that should carry him here.

Where’s that missile equipped Predator when you need it?

I haven’t had the time or the right mindset yet to dig into the legal arguments surrounding the New York Time’s disclosure of the NSA Wiretaps of some US Citizens thought to be connected to Al-Qaeda, but I did enjoy this little tirade from Froggy:

So essentially what the liberals are saying is that the US should not monitor calls from known terrorists abroad to previously unknown US co-conspirators under any circumstances. They are proposing in essence that only calls to terrorist co-conspirators who are well known and under surveillance already can be monitored. The idea that the US should put its fingers in its own ears and repeat, “I can’t hear you, I can’t hear you!” when terrorists communicate with their agents in the US is one of the most ridiculous and silly ideas that I have ever heard. Members of the Frogosphere already know that Democrats cannot be trusted with the security of the United States, but this highly political stance cannot be mistaken as anything other than the utterly irresponsible and laughably weak gesture that it is.

I am especially encouraged by the President’s rapid and forceful defense of this practice which has already compelled his leftist malefactors to take indefensible positions that they will undoubtedly regret at the ballot box. Timing the release of this story with the filibuster of the Patriot Act and the successful Iraqi elections demonstrates beyond reasonable doubt that the MSM and the radical left are one single purpose entity focusing on any possible method of attacking the President and prematurely ending his term. When Democrats make the same argument against wiretaps targeting terrorists trying to kill millions of Americans with eavesdropping on civil rights leaders and anti-war activists in the 1960’s one shudders at the implications of that level of timidity and cowardice.

When I get a chance to read the 20+ articles I have tabbed here in Firefox about this, I’ll spout off some more…

As is appropriate, the Indiana State Police made the arrest in a case making national news today, as reported in today’s Indianapolis Star:

A man wanted in the slaying of a Pennsylvania couple and the possible abduction of their 14-year-old daughter fled from Indiana state troopers at speeds in excess of 90 mph, running other cars off a two-lane highway before he crashed and was captured today, police said.